Which Should I Get? Smith and Wesson Shield vs M&P Compact

Smith and Wesson make some of the best CCW pistols around, and what a number of people come down to is choosing a Smith and Wesson Shield vs M&P Compact. Both guns have their merits, and it would be hard for a person to go wrong with either one.

However, the truth about carry guns is there is no such thing as a perfect pistol; there are instead guns that are more right for you. Which is best between the Shield vs M&P Compact, though?

The M&P Shield (in 9mm or .40) has a 3.1-inch barrel, standing 4.6 inches tall, 6.1 inches long and a svelte 0.94 inches wide, weighing in at 19 ounces unloaded. Both versions come with a flush-fit or extended magazine, and capacity is 7+1 or 8+1 rounds of 9mm or 6+1 or 7+1 rounds of .40. The base model comes with white 3-dot sights, but these can be easily upgraded to night sights either by buying the night sight model or upgrading them yourself.

The M&P Compact, though, is a bit heftier and in truth is an M&P that’s been cut down for easier concealment. Barrel length is 3.5 inches, but width swells to 1.18 inches as the magazine is a double-stack, length increases to 6.7 inches and weight is 24.7 ounces unloaded. However, the Compact is a little shorter as it stands only 4.3 inches tall. The Compact comes with a flush-fit magazine and a magazine with a pinky extension, but it doesn’t change capacity; it’s 12+1 of 9mm or 10+1 of .40.

Upgraded versions of both guns are available from the S&W Performance Center as well.

One of the things that has made the Shield so popular is that Shield recoil is so manageable relative to its size. However, is the M&P Compact so much easier to shoot given size and weight that the Shield is totally outclassed?

In full disclosure, this writer has shot the full-size M&P9, the M&P9C and the Shield 9. The M&P9 is one of the easiest, most comfortable guns to shoot on the market. Complain if you must about the trigger (which is one of the most common complaints about the S&W M&P line out there) but the M&P9 barely recoils more than a .22.

The M&9C is only a tad more lively. The difference is noticeable, but only just. Most shooters should have no problem going through several hundred rounds in a sitting.

Shield recoil compared to M&P Compact recoil is only an incremental increase. A touch more lively than the M&P9C, but again – only just. The Shield would likely have some snap to it if shooting +P ammunition, but shooting regular old hardball is still a breeze. Shooters with larger hands will prefer the extended magazine as the flush fit is for smaller hands, but in any case Shield recoil is quite moderate.

If shooting .40, there will be a bit more in terms of “snap” and felt recoil, but not so much that it would be unshootable. Novice shooters and those with somewhat more frail wrists may want to eschew the Shield .40 and M&P40C, as they may be a bit too taxing during long shooting sessions, but in truth they are far from larger-bore or magnum cartridges in terms of recoil. Indeed, shooting a .357 Magnum would be far more taxing for such shooters.

The shorter barrel length of the Shield doesn’t inherently impact accuracy, but does impact bullet velocity…but not enough to make the typical 9mm defense round ineffective. Besides, plenty of short-barrel rounds are available that will more than suffice for carry rounds.

Other than that, few people will have difficulties shooting either pistol. 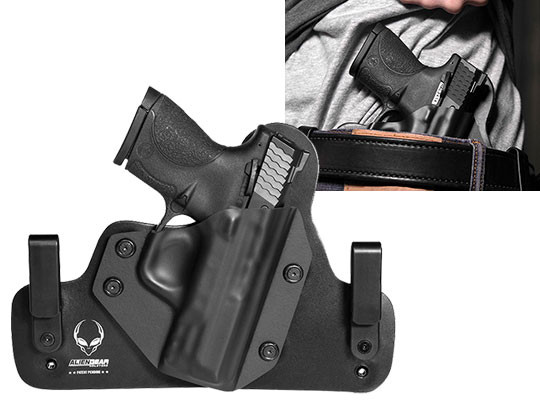 In the fullness of time, Smith and Wesson also released the M&P Compact M2.0, a refreshed and updated version of the M&P Compact. The changes weren’t huge, but they were also more substantial than the changes to the M&P Shield made for the Shield M2.0 model.

The M&P Compact M2.0 has the revised trigger and slide serrations, but barrel length has been increased to 4.0 inches, though a 3.6-in model is available as well. The dust cover has likewise been extended so you still have a full-length rail. The grip has also been extended an additional 0.7 inches, though it’s pertinent to note that the taller height (5 inches overall) is actually the same with an original M&P Compact with the extended magazine.

Overall length is increased to 7.3 inches with the 4.0-inch barrel, bringing the M&P Compact 2.0 basically to near-as-makes-no-difference the same specs as a Glock 19. Capacity is the same, 15+1 of 9mm, and price works out about the same too. Expect about $500 in most stores for the base model.

If you felt the M&P Compact should have been a hair bigger, then you’re in luck. However, if you thought it was just about the right size…the M2.0 model is probably a bit bigger than what you’re looking for.

It’s still a good gun. It’s easily carried and concealed. They are very pleasant to shoot. But chances are that you’re leaning to a gun of this size already or a gun of the size of the Shield already rather than deciding between them. The original compact was only a bit longer, a bit taller and a bit wider, but had double-stack capacity. This is more of a compact service pistol.

M&P Shield concealed carry is easy for anyone. It positively disappears in a Shield holster for CCW and many people have no issues concealing one with a high-ride OWB. A lot of people consider it “Goldilocks gun” for this reason, since it carries a decent amount of firepower but also conceals impossibly well and nearly anyone can shoot it without trouble.

M&P Compact concealed carry, however, may be a bit more imposing. The extra width is the kicker; while it isn’t so much that it makes the gun impractical (it’s only an extra 0.3 inches) it can be enough for some people that concealment becomes a bit more difficult in the right circumstance. The added length is only 0.6 inches, which is likely not to make a difference but can on the right person.

That said, very few people will have any issue concealing an M&P Compact. In an IWB holster, it should be all but undetectable though OWB concealment may be a bit less practical.

Which one is right for you? Well, first know yourself. Are you proportioned so that a slightly wider, slightly longer pistol won’t conceal as well as a slim single-stack? In that case the Shield is your best bet. Is the extra 5 ounces of unloaded weight going to make a significant difference in comfort? Then eschew the larger gun for the smaller one.

Conversely, do you want as many rounds as possible on your person at all times? The Compact holds 4 to 5 more, and is also compatible with full-size magazines with a grip sleeve. Are you the person who wants or feels they need a full-size spare magazine for a compact gun as a backup? The Compact is definitely the ticket in that case.

The Shield, given its slim dimensions and light weight is one of the most popular CCW pistols on the market today, and a lot of people also swear by the Compact. Thing about the Compact is that it is bigger and weighs a bit more, but it is far from too large to conceal. The Compact is roughly halfway in size between a Glock 26 and a Glock 19, both of which are insanely popular CCW guns. Very few people will have an issue concealing it.

However, another difference is that the Compact usually costs another $100 or more (upward of $200 in some cases) in gun stores and is not as common as the Shield. Virtually every gun store has the Shield for anywhere from just under $300 to about $400. Not nearly as many stock the Compact. For some people that may not make much of a difference, but to some it does.

Either way, you get a great gun.

When you do head to the range, you’re going to need a target…but why pay for paper targets if you don’t have to? We’ll give you as many as you want – you just need to download Alien Gear’s printable 8.5” x 11” shooting target. Make as many copies as you like! We will continuously be adding new target options to our lineup. Check out our complete free printable shooting targets page to see the full selection as they start rolling in.