Precious few pistols are made for left-handed operators, so lefties usually have to settle for ambidextrous handguns. Most any pistol or revolver can be operated by either hand with sufficient training and practice. However, in this article, we’re going over five different handguns that rock for lefties due to ambidextrous design.

The Ruger SR9c has a safety that’s ambidextrous – very rare. The magazine release and slide release are also accessible with either hand. Best of all? It’s a great concealed carry pistol and comes in compliant versions for state-specific restrictions (like California).

Nearly any Glock can be readily used with either hand. Because there is no manual safety, it’s just a question of getting used to triggering the the slide release and magazine release with either hand. This is something that can be figured out easily – ergo plenty of lefties have stuck with the Glock 19 as a go-to concealed carry pistol.

This has become a fan favorite amongst southpaws. In terms of ergonomics, the HK VP9 absolutely destroys the competition. It’s a striker-fire pistol with ambidextrous controls (magazine release, slide release) that has some very unique design features that set it apart from many of the other striker-fire pistols out there. 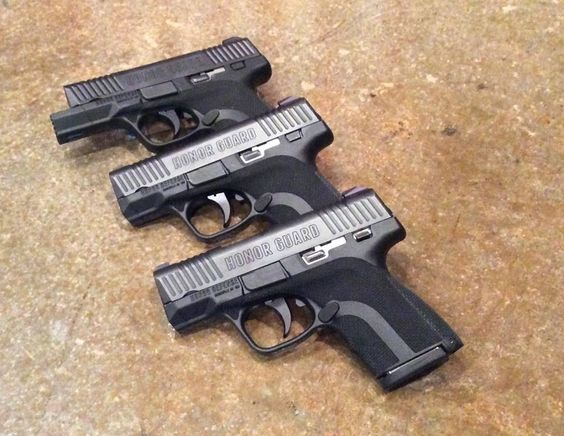 The Honor Defense Subcompact, at first glance, looks like a knock-off M&P Shield. Once you actually handle one, you’ll notice that it is a similar pistol in terms of shape, size and function…except that more attention is clearly being paid to the details.

The fitment is a little tighter. It has swappable backstraps. The slide serrations actually go over the full slide for a better grip, at the front and back. The front sight has a red insert and is more visible. The trigger is a bit stiffer, with a 7-lb pull, but you don’t really notice it as the travel is smoother; it’s crisper and cleaner as a result and the almost-flat blade is very easy to manipulate. The texturing is actually quite nice and grippy.

The best part? It’s fully ambidextrous. Magazine releases and slide releases on both sides. The takedown lever is only the left side, but that’s kinda par for the course. If you choose the model with thumb safety, those are ambidextrous too.

We don’t know why this gun doesn’t get more love.

Beretta’s next generation of pistols were designed with modular features. This means that the shooter is in control of how he wants to set up his pistol. If he wants to be a lefty, he can set up the magazine slide release, external safety, and slide release for left-hand side. If he’s a traditional southpaw that is used to certain controls being on the right side, he can do that as well. It’s a very versatile, compact concealed carry pistol. Be warned – it does snap something fierce.

The best way to test if a left-handed concealed carry pistol is right for you is to test drive it at the range. This will give you a very good feel for how the pistol operates within your hands – not just how it looks in the display case.

And just remember – All Alien Gear Holsters are available with a left hand option. Simple select left handed or right handed preference at checkout and we’ll customize your concealed carry holster for you.

In addition we also provide a lifetime change-out for the high-retention holster shells. Just because you switch up your choice in pistol doesn’t mean you can’t carry in your Alien Gear Cloak Tuck.

Just because being left-handed may deprive you of a few choices of things doesn’t mean there aren’t a good number of left handed holsters out there. Plenty of left-handed carry rigs are available to the southpaw, including IWB and OWB holsters, in either leather or modern materials. Check out these left-handed holsters by Alien Gear.